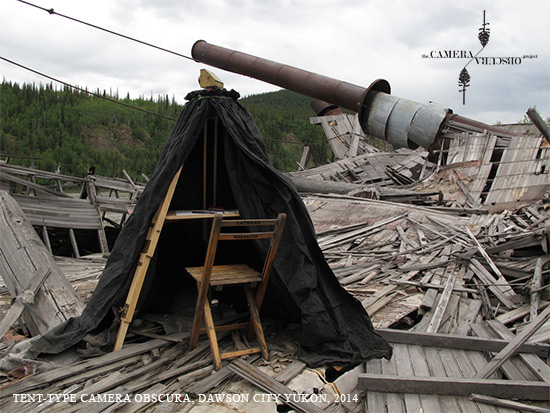 Summer Solstice 2015 will see a festival of cameras obscura and other like-minded artworks in Dawson City, Yukon — home of the twenty-four hour “midnight sun.”

Migrating across the domains of art, science, and popular entertainment the camera obscura held a prominent place in the visual culture of previous centuries. Ranging from small portable devices to permanent walk-in structures, these are darkened spaces in which live images of the outside world appear through seemingly magical means. With origins in Chinese, Greek and Islamic cultures, cameras obscura gained central importance in the optical culture of early modern Europe. Today these optical devices hold a continued fascination for artists and scholars – whether for the pleasure of their curious and inherently simple projected images or as a point of departure for a range of critical, historical and theoretical interests.

During the Midnight Sun Camera Obscura Festival artists’ projects in and around Dawson City will be complemented by exhibition projects in Canada’s northernmost contemporary art gallery, the ODD Gallery and at the Yukon School of Visual Arts’ YSOVA Gallery in Dawson City. Hosted by the Klondike Institute of Art and Culture, festival events will include tours of the artists’ projects, workshops, and public presentations. The Festival is an event of the Camera Obscura Project, made up of an international group of artists, scholars and students who collectively explore interest in cameras obscura, related optical phenomenon, the connections between art and science, art-making in Northern and wilderness settings; and the meeting place of learning and play.

Based at Thompson Rivers University in Kamloops, B.C., The Camera Obscura Project and this Festival have received funding through an Insight grant from The Social Sciences and Humanities Research Council of Canada and from the Canada Council for the Arts. Please visit the group’s website midnightsuncameraobscura.com for updated information as the Festival draws near and to learn about group members’ practices.

The Midnight Sun Camera Obscura Festival has received generous support from the Social Sciences and Humanities Research Council of Canada, The Canada Council for the Arts, Thompson Rivers University, The Klondike Institute of Art and Culture, the Yukon School of Visual Arts and the Yukon Arts Centre.