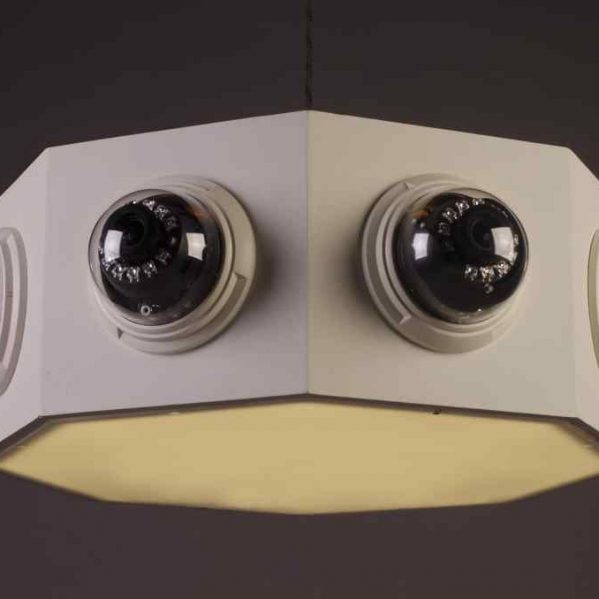 The 2017 Curator’s Choice exhibition features a new project by Levi Glass. The artist draws on modern methods of surveillance and a range of critical analyses of the gaze to create a work that involves audience interaction in order to create a mediated experience of viewing and a prompt for self-reflection. Glass cites Foucault’s theory of panopticism, articulated in his work Discipline and Punish (1975) wherein he reflects on the role of surveillance in power structures and as a means of control in society. In these times of increasingly politicized fear, we have seen the rise of Bill C-51 in Canada to expand the surveillance powers of intelligence agencies, and in the USA the National Security Agency has undertaken warrantless surveillance while the Transportation Security Administration has implemented full-body scans under the guise of protecting the public, while simultaneously collecting data with or without an individual’s knowledge or consent. Advances in technology and data collection have made concerns about privacy and power structures between the state and the people ever more pertinent.

In this installation for The Cube, Glass employs multiple cameras and monitors to create a surveillance system that disrupts the very power structure of surveillance by turning the viewer into both the observer and the observed. Issues of security, privacy and individual rights are raised as the live feed is interrupted by recorded footage of previous encounters within the system. The work aims to create a moment of self-reflection as the cameras are turned on the viewer and others for immediate viewing on the adjacent monitors.

This year’s Curator’s Choice is the 13th annual exhibition of work by a student graduating from Thompson Rivers University. Selected by Kamloops Art Gallery Assistant Curator Craig Willms, Curator’s Choice annually highlights emerging artists from TRU’s Bachelor of Fine Arts graduating class giving them an opportunity to create new work for a professional exhibition space outside the context of school.

« The Wells Gray Group: A Brush with Nature
Visual Arts: For an exciting degree program or elective. »