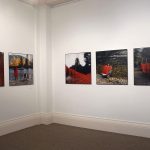 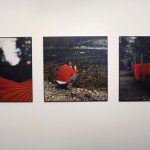 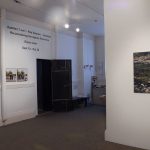 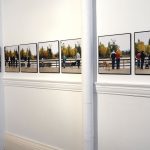 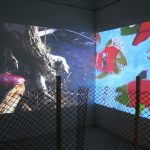 The exhibition Sqlelten7úw’i – Red Salmon – Sockeye: Reconsidering the Adams River Run by established Kamloops artist Eileen Leier began on Saturday, September 10th. Accompanying the exhibition, people of all ages were invited to share their stories of salmon and help populate a ‘salmon run’ with their own salmon creations under the water of the virtual Adams River flowing in front of the Arnica gallery in the Old Courthouse Cultural Centre.
For Sqlelten7úw’i – Red Salmon – Sockeye the public was invited to explore the largest sockeye run in North America through film, photography and underwater video. Collaborating and consulting with local organizations, the artist documents the perennial scene where tens of thousands of local and international visitors, especially those who journey to Roderick Haig- Brown Provincial Park, witness the run as a primordial ritual during dominant years of the salmon’s lifecycle. Leier is particularly interested in the urban constructs of information kiosks, food booths, and souvenir tents—as well as the spectators—that raise critical questions about perception and meaning in relation to natural phenomena,
Eileen Leier is Associate Professor in the Visual and Performing Arts at Thompson Rivers University. With degrees from Concordia (MFA), San Francisco Art Institute, Emily Carr University (BFA), and Simon Fraser (BA), Leier has shown photo-based and web artworks in solo and group exhibitions in Quebec, Ontario, Western and Northern Canada, as well as internationally in the United States, Scotland, France and Brazil. Leier’s art practice examines Canadian historic landscapes as sites of collective public memory. The photographs in these projects shift between memory and history, and personal and collective experience of these locations, For this exhibition at Arnica, she invited the audience to augment that experience with their own recollections and creations.
Arnica Artist Run Centre gratefully acknowledges the financial assistance and support of the Province of British Columbia, BC Arts Council, Thompson Rivers University, BC Festival of the Arts Legacy Fund, City of Kamloops Arts Commission, and Nature’s Fare.