Ernie Kroeger in BEFORE DIGITAL: POST 1970 PHOTOGRAPHY IN ALBERTA 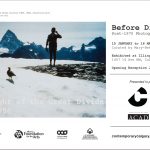 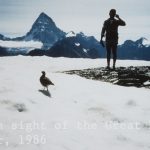 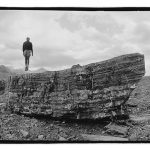 Of the photographic negative master photographer Ansel Adams once said, “The negative is the equivalent of the composer’s score…” Not so much anymore.

With the advent of digital technology and an explosion of change in how images are made, even the  ‘negative’ seems to be a redundant term.

As for the  hallowed darkroom, where a certain type of magic could and did take place, fewer and fewer exist. Replaced by the recording of images electronically and then displaying them instantly on the screen of a digital camera or computer. No film, no chemicals and no specialized knowledge – pertinent to the 150 year plus history of the analogue photograph – is needed

Before Digital: Post-1970 Photography in Alberta takes a selective look at the late  analogic period through the eyes, camera shutters and darkrooms of twenty-seven photographers working in the province. Featuring close to 80 works in (gelatin) silver print, C-print, Ektacolour, Cibachrome and other less common film products or  processes, this large survey also highlights the growth of fine art photography from the documentary to the more conceptual or photo-based art. Considered as well is the contribution made by certain post-secondary institutions, public art galleries and collections in the province.

In other cases, Sima Khorammi journeyed to Iran, Romania and Croatia to document the Romani while alpine aficionados, Ernie Kroeger and Diane Colwell ‘refresh’ the cliched subject of the Canadian Rockies with his Cibachromes and her manipulated polaroids. Even more recent, is the “21st century spin of a vehicle-drawn darkroom trailer” aka The Mobile Darkroom built and used by Shane Arsenault and Natalia Barberis, graduates of the Alberta College of Art + Design.