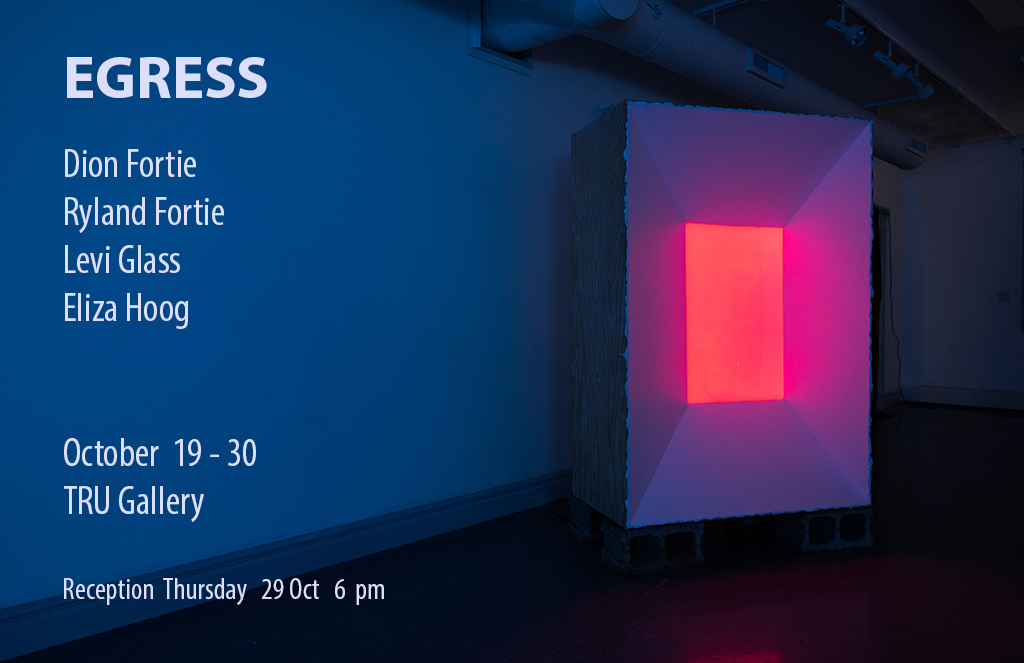 Egress
The artists exhibiting work in Egress are all current BFA students: Dion Fortie, Levi Glass and Ryland Fortie at Thompson Rivers University and Eliza Houg at the Nova Scotia College of Art and Design. The present exhibition follows from their having exhibited together in … strange things done … at the Yukon School of Visual Arts’ Confluence Gallery in Dawson City, Yukon. There, these four artists were also research assistants with the Camera Obscura Project, working alongside an international group of artists and scholars to realize the 2015 Midnight Sun Camera Obscura Festival, hosted by the Klondike Institute of Art and Culture. Taking the historical form of the camera obscura as a starting point but, equally, drawing inspiration from Dawson City’s twenty-four hour summer light, these artists created self-illuminated artworks in and around the Confluence Gallery. While two of the works, Dion Fortie’s “Passing Through,” and Ryland Fortie’s Landmark Peripheral, are from … strange things done …, Levi Glass’ Portent has been created in Kamloops, in response to the local light, topography and cultural landscape. Eliza Houg’s Pretty Noisy has assumed varied forms: a workshop and series of resultant (in shed) projections live-streamed into the Confluence Gallery and, for Egress, video footage from her Dawson City project playing on a pair of small analogue televisions. The trunk upon which her televisions sit is perhaps a reminder of Dawson City’s history as a transient frontier town. In a manner paralleling the interests of many contemporary artists Houg, Glass and the Fortie brothers have created an exhibition whose luminous glow recalls artists’ and writers’ interests in the sublime during the latter seventeenth and early eighteenth centuries—such a sensibility in continual dialogue with aspects of visual culture and technology that they see slipping away with the emerging technologies of their own generation.

Return to Inside TRU